Home » A mouse model for type B tyrosine hydroxilase deficiency

Tyrosine Hydroxylase Deficiency (THD) is an inborn error of dopamine synthesis. Around 70 cases of THD have been identified so far, with manifestations ranging from mild movement disorder to encephalopathy with parkinsonism. Based on the clinical signs observed, two main forms have been described. Type A has a more attenuated phenotype and it is normally responsive to treatment with L-DOPA, the precursor of several neurotransmitters such as dopamine and adrenaline, collectively known as catecholamines.

By contrast, type B form is more severe and is generally poorly responsive to drugs. The disorder is caused by changes in the gene that codes for tyrosine hydroxilase (TH), an enzyme that converts tyrosine into L-DOPA. Although several mutations have been identified, almost 50% of patients with type B THD present the same mutation. The neurobiological mechanisms underlying the differences between these two phenotypes are scarcely known.

A group of researchers led by Dr. Thöny from University of Zurich, Switzerland, proposed for the first time a mouse model that displays the main clinical features observed in patients with type B THD. This model will be critical not only to better understand the mechanisms that cause the disease, but also to identify new effective therapeutic strategies.

In this study, recently published in the prestigious journal Brain, Dr. Thöny and colleagues generated a new mouse strain where the TH gene carried a mutation named Th-p.R203H, equivalent to the most recurrent mutation in patients with type B THD. 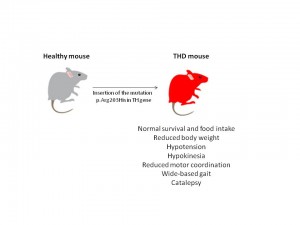 They found that the genetically engineered mice presented characteristics shared with type B THD patients, such a significant decrease in body weight, lowered blood pressure and a reduced amount of catecholamines in the brain. In addition, these mice also showed impaired motor coordination and function when subjected to several behavioral tests. Interestingly, their performance was not rescued upon L-DOPA treatment.

Finally, the researchers found an abnormal stability of TH enzyme that leads to a lack of affinity for L-DOPA. The proper transport of TH to the striatum also requires the stabilization of the enzyme and this could explain why transgenic mice presented a specific deficit of TH expression in this area of the brain. Thus, emerging therapies based on protein stabilization may represent promising approaches to improve the biochemical and locomotor phenotype observed in patients.

In conclusion, even though similar transgenic mouse strains were previously generated by other groups to mirror human THD, Dr. Thöny’s model is the one that most reproduces the clinical and pathological features of the disease and may represent a starting point for studying new therapies for THD forms still resistant to L-DOPA treatment.

Interestingly, TH enzyme was not localized in the striatum of transgenic mice, where a gradual loss of its activity is also found. Could we consider this phenotype as a neurodegenerative disorder?