Inflammation modifies risk and/or severity of a variety of brain diseases through still elusive molecular mechanisms. Tomasoni et al. (open access article available at https://www.ncbi.nlm.nih.gov/pmc/articles/PMC5370184/) show that hyperactivation of the interleukin 1 pathway, through either removal of the interleukin 1 receptor 8 (IL-1R8,) or activation of IL-1R, leads to up-regulation of the mTOR pathway and increased levels of the epigenetic regulator MeCP2, bringing to disruption of dendritic spine morphology, synaptic plasticity and plasticity-related gene expression.Genetic correction of MeCP2 levels in neurons deprived of IL-1R8 rescues the synaptic defects. Pharmacological inhibition of IL-1R activation corrects transcriptional changes, restores MeCP2 levels and spine plasticity and ameliorates cognitive defects in mice deprived of IL-1R8.

This study demonstrates that the hyperactivation of the IL-1R pathway results in the overexpression of MeCP2, which is responsible for syndromes associated with intellectual disability such as Rett syndrome. Also, it shows that the ynaptic defects can be pharmacologically reversed.

These findings have important repercussions in the clinic, as they could open the road to the use of anti-inflammatory drugs as therapeutic treatments for neuropsychiatric illnesses such as schizophrenia, autism and mental retardation, for all of which an immune component has been demonstrated. 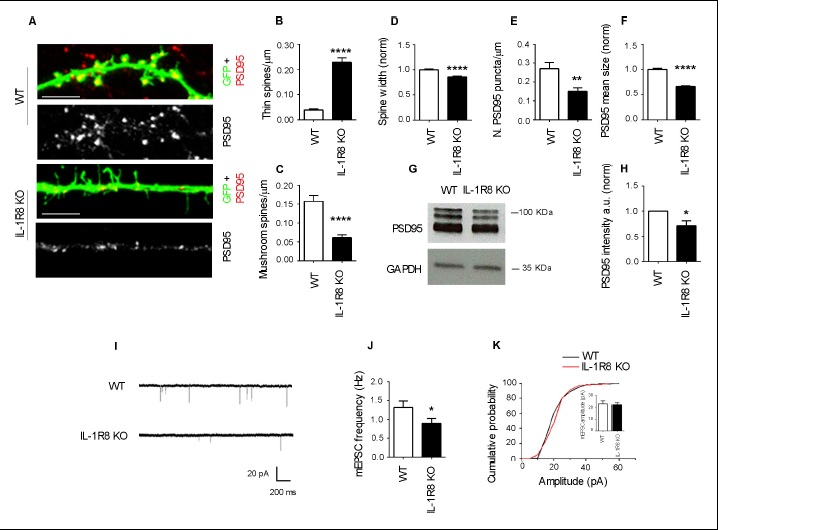 (I) Representative mEPSC (mini Excitatory Post Synaptic Current) traces recorded from WT and IL-1R8 KO neurons. mEPSC is a measure of the probability of the release of neurotransmitter vesicles from the presynaptic neuron.