Home » The dynamic functional connectivity of the brain and the fMRI: an overview of analytical strategies

Resting-state functional magnetic resonance imaging (fMRI) is a method of functional brain imaging (i.e., the measurement of the aspect of a brain area by images) that can be used to evaluate regional interactions that occur when a subject is resting. The fMRI has highlighted the rich structure of brain activity in absence of a task or stimulus. A great effort has been dedicated in the last two decades to investigate functional connectivity (FC), i.e. the functional interaction between different regions of the brain, which was for a long time assumed to have stationary nature. Only recently the dynamic behaviour of the FC was revealed, showing that in addition to the correlational patterns of spontaneous fMRI signal fluctuations, the connectivity between different brain regions showed significant variations within a typical resting-state fMRI experiment.

As a consequence, a considerable amount of work has been directed to assessing and characterising dynamic FC (dFC), and several different approaches were explored to identify relevant FC fluctuations. At the same time, several questions were raised about the nature of dFC, which would be of interest only if brought back to a neural origin. In support of this, correlations with electroencephalography (EEG) recordings, demographic and behavioural data were established, and various clinical applications were explored, where the potential of dFC could be preliminarily demonstrated.

The review, fully available at http://www.sciencedirect.com/science/article/pii/S1053811916307881 is aimed to provide a comprehensive description of the dFC approaches proposed so far and point at the directions that appear as most promising for the future developments of the field. Advantages and pitfalls of dFC analyses are addressed, helping the readers to orient themselves through the complex web of available methodologies and tools. 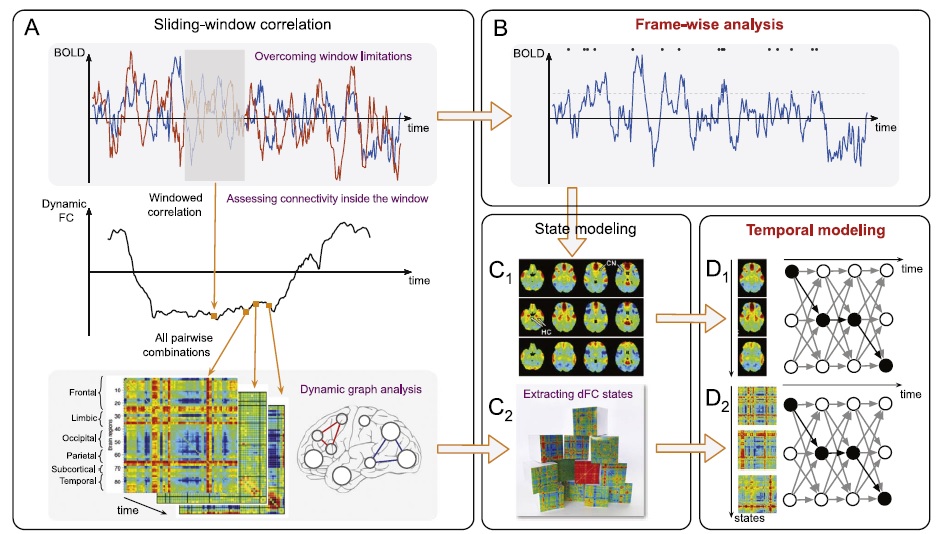 (A) The most commonly used approach is the traditional sliding window methodology, where the connectivity between brain regions is computed as Pearson correlation between pairs of blood-oxygen-level dependent (BOLD) timecourses, over a temporal interval spanned by a rectangular window (upper panel). This computation is repeated iteratively, shifting the window by a specific step every time, to generate a connectivity timecourse (middle panel). Performing this procedure for all connections yields one connectivity matrix per window, i.e. a dynamic characterization of whole-brain connectivity (lower left panel). Building on this core framework, improvements towards several directions have been developed, including using other window types, refining the connectivity criterion, or performing a whole-brain level graph analysis.

(B) A recent conceptual alternative to the sliding window framework is a frame-wise description of timecourses, where only moments when the BOLD signal exceeds a threshold are retained for the analysis. These frames can be used for the generation of voxelwise brain states (C1), the co-activation patterns (CAPs). Alternatively, the connectivity matrices obtained from (A) can be used to retrieve dFC states (C2). Through temporal modeling, parameters describing CAPs (D1) or connectivity states (D2) and their relationship can be inferred, so that amongst all possible state trajectory options (denoted by the set of white dots linked by light gray arrows), the observed path (black dots and arrows) is the most likely. Compared to sliding window analysis, frame-wise analysis and temporal modeling are two conceptually innovative directions for future dynamic functional connectivity work.