What do you know about glutamatergic transmission?

What kind of neuropaediatric disorders are related to glutamatergic receptor mutations?

What kind of symptoms could be associated with abnormal glutamatergic transmission?

Glutamate is the most abundant excitatory neurotransmitter in the nervous system and it plays a key role in long-term potentiation (LTP). LTP is involved in most aspects of normal brain functions, including cognition, memory and learning. 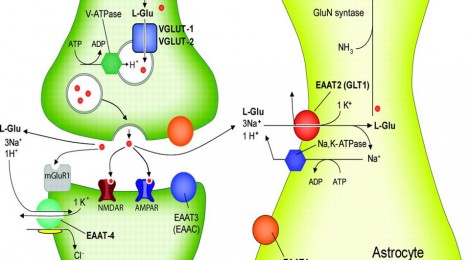 Figure of a glutamatergic synapse. Click to obtain the original image source

Alterations in glutamatergic neurotransmission have long been associated with neurodevelopmental and psychiatric disorders. A recent review by Soto et al, summarizes interesting new information and approaches to glutamatergic disorders in children.

Let’s start with some basic concepts of neuroscience. The glutamate receptors can be divided into two groups:

–Metabotropic glutamate receptors (mGluRs) indirectly activate ion channels on the plasma membrane through a signaling cascade that involves G proteins. They are slower than iGluRs but associated with a more prolonged stimulus. 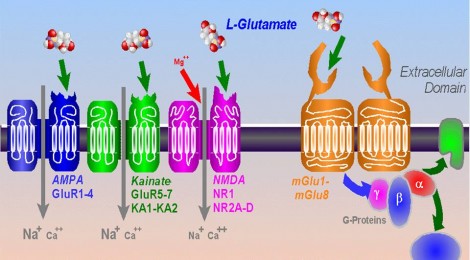 Differences between both receptors are due to the involvement of many diverse messengers carrying out the signal. Glutamate receptors are usually not specific and sometimes another agonist is required.

What kind of glutamatergic disorders can we expect to find in our paediatric patients?

Recent advances in high-throughput DNA sequencing have increased available information about the prevalence of mutations in glutamate receptors (GluR) among afflicted individuals. The previously mentioned review elaborated by a group of expert glutamatergic neuroscientists (Soto et al) shows that, although the number of studies reporting GluR mutations in neurodevelopmental disorders has been until now restricted, some initial conclusions can be drawn. Although there are no strict relationships between receptor subunit or type and disease, some interesting preliminary conclusions have arisen.

-Mutations in genes coding for ionotropic glutamate receptor subunits, which are central to synaptic transmission and plasticity, are mostly associated with intellectual disability, epileptic encephalopathies and autism spectrum disorders.

-In contrast, mutations of metabotropic GluRs, having a role on modulating neural transmission, are preferentially associated with psychiatric disorders.

Also, the prevalence of mutations among GluRs is highly heterogeneous, suggesting a critical role of certain  subunits in neurodevelopmental and psychiatric pathophysiology. The use of new DNA diagnostic tools during the following years will be crucial to understanding whether the different receptor subunits are associated with certain disorders or not, as well as their interaction with genetic background and environmental factors.

Open your mind to different points of view when considering neuropaediatric disorders:

Abnormal glutamatergic transmission can be either primary (mutations in genes coding for glutamate synthesis, transporter, receptors) or secondary to other different conditions