We know, thanks to years of investigation, that our intestine is populated by 1-2 kilograms of microorganisms, almost the equivalent of an average human brain. We also know that this living and transforming universe is critical for digestion of food, regulation of immune system, response to drugs and susceptibility to disease. Recently, amazing data indicate that our gut is also able to communicate with our brain. Elaine Y. Hsiao’s group just published in the journal Cell a fascinating work demonstrating that microbiota, the name given today to the microbe population living in our intestine, regulates the biosynthesis of serotonin. The manipulation of the microbiota could thus represent an approach to treat serotonin-related disorders.

Serotonin, synthesized from the amino acid L-tryptophan, was discovered and isolated in 1948. It is a brain neurotransmitter and a regulator of gastrointestinal function. Several properties have been attributed to this molecule, including control of movement, emotions, and cognitive functions. Almost 90% of the serotonin present in our body is produced in the gut, but it can be found also on platelets and in the brain. Different studies associate dysregulation of serotonin to pathological conditions, such as irritable bowel syndrome (IBS), cardiovascular disease and depression. In addition, some rare inherited disorders belonging to the group of inborn errors of neurotransmitters, are strongly associated to impaired levels of serotonin, including aromatic L-amino acid decarboxylase deficiency or 6-pyruvoyl-tetrahydropterin synthase deficiency.

Dr. Hsiao’s team, from California Institute of Technology, showed that germ-free mice, i.e. mice that lack microorganisms, presented less serotonin but more unprocessed tryptophan in their blood and gut, compared to mice with untouched microbiota. To confirm that gut bacteria were responsible for serotonin production, microbiota from normal mice was transferred to germ-free mice. The transferred microorganisms were able to completely restore serotonin levels in treated mice. Moreover, when normal mice were treated with antibiotics to disrupt microbiota, they behaved very similarly to germ-free mice. 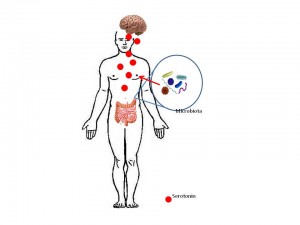 Tens of trillions of bacteria organized in more than 1000 different species habit the human gut. The composition of the microbiota is strongly dependent on aging, diet, use of antibiotics and environmental factors. For this reason, although healthy people share a quite conserved microbiota, each individual display a unique signature.

By isolating from the total microorganisms different bacterial species and transferring them to germ-free mice, Dr. Hsiao and colleagues found that serotonin production was due to a subset of spore-forming microbes, principally composed by Clostridial species. These species are also present in human gut, where it exerts the same identical function, since transfer of human spore-forming microbes to germ-free mice still result in restoration of serotonin.

The use of germ-free and normal mice also permitted the researchers to determine that the microbiota regulates gastrointestinal motility, platelet function and blood coagulation. However, other biological processes driven by serotonin or resulting in altered serotonin levels have to be investigated.

“We identified a group of bacteria that, aside from increasing serotonin, likely has other effects yet to be explored,” says Dr. Hsiao, “Also, there are conditions where an excess of peripheral serotonin appears to be detrimental.

Brain is connected to the gut

As explained by Dr. Hsiao during her TEDxCaltech talk, microbes utilize different strategies to talk to the brain, by directly contacting with cells of the nervous system, by activating immune cells or endocrine cells, or by producing themselves neurotransmitters.

Our intestine is continuously connected to the brain. It is populated by a certain type of bacteria that can induce serotonin production. The characterization of the mechanisms by which these microorganisms stimulates the secretion of the neurotransmitter could permit the identification of new microbe-based therapies for serotonin-mediated disorders.