Home » The MECP2 gene and its role in the Rett syndrome

The Rett syndrome (RTT) is a neurological disorder caused by mutations which occur in the gene MECP2 (methyl-CpG-binding protein 2). This gene is located on the X chromosome, and the RTT affects only females – 1 every 10,000 – because the mutation of MECP2 in males is not viable. However, some isolated cases of boys with RTT have been reported. Due to its low frequency, the RTT is classified as a rare disease.

Development of the RTT over life

The early symptoms of the RTT appear at 6 – 18 months after birth. They include a delay or a stop of the motor and communication skills of the kids. During this stage, it has been observed an impairment in the normal neuronal development and the appearance of autistic traits. After this early stage, there is a period between 2 and 10 years (called stagnation period) in which the worsening of the symptoms is stopped, and there are some signs of recovery in certain abilities.

Then, the patients suffer a further loss of mobility, developing scoliosis and losing muscular tone. The RTT patients have a severe cognitive handicap, and shows microcephaly and seizures; moreover, they present breathing and cardiac problems. The mortality associated with the RTT is 23% at the age of 25 years, and almost 40% at the age of 37.

The MECP2 gene can undergo different mutations that normally does not completely inactivate the resulting protein: even in the RTT subjects, there is always a certain activity of the MECP2 protein, which causes a wide variation of the symptoms and of their severity. Moreover, the fact that the RTT affects a lot of different functions has pushed the scientists to investigate the function of the MECP2 in order to understand what genes, proteins and metabolic pathways are regulated by this gene.

Functions of the MECP2 gene

The MECP2 gene is present in all the vertebrates. Its main function is to regulate the expression of many other genes by the binding of the MECP2 protein to the methylated cytosines of the DNA molecule. When there is a strong pattern of methylation, the MECP2 promotes the packaging of the methylated DNA in a wrapped structure, called chromatin: the result, in the majority of cases, is the down-regulation or the inhibition of the wrapped genes, because the transcription factors cannot physically reach them. 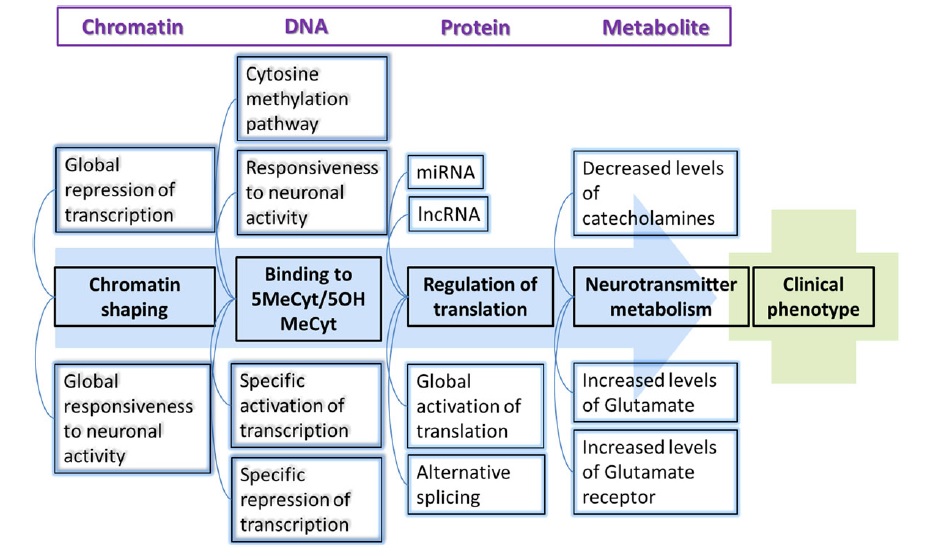 – At the genetic level, MECP2 influences the transcription of various genes: some of them are up-regulated, while others are down-regulated. Without entering in details, these genes are involved in the neuronal development, in the neuronal signal transduction, in the breathing function, in the stress response, and in the general regulation of gene expression. The malfunction of the MECP2 protein leads to the imbalance of the expression of many genes, which might give some clues for the explanation of the symptoms of the RTT.

– At the biochemical level, the RTT patients have less catecholamines – dopamine, serotonin and norepinephrine – maybe due to the reduced development of the neurons and the synapses. On the other hand, the levels of glutamate increase, probably because it cannot interact with the glutamate receptors, whose number decrease strongly.

– Talking of the metabolic pathways, about 60 of them are affected, among them the pathways of inflammation, cholesterol metabolism, apoptosis, cytoskeleton formation, etc. The effects of the MECP2 in RTT involve the balance among the pathways, because none of them seems to be completely interrupted. Neuronal cells suffer an imbalance in their function and maintenance, and in the formation of the synapses. This could explain why the RTT cognitive symptoms start after the 6th month of age: the neurons grow at the beginning, but finally they do not work properly.

MECP2 is a key, highly conserved gene. Its impairment modifies the expression of many genes and alters the balance of different metabolic pathways. The subjects with the RTT suffer a damage in their neuronal function and in the formation of the synapses, so that they present cognitive deficits, seizures and some autistic behavior. It is necessary a great effort to gather all the information at the genetic, biochemical and clinical level in order to reach a deeper knowledge of the RTT to discovery a drug that could improve the symptoms of this so far incurable disease.