Neuronal cells have developed a characteristic shape, which causes that the distance between the cell body and the synapses is often very long. Therefore, they have a complex and efficient system to transport many proteins from the center to the periphery, and vice versa. The process of transport of proteins from the cell body to the synapses is called “anterograde”, while the opposite way is “retrograde”.

Both processes depend on a transport machinery that moves along a cellular highway constituted by the microtubule chains. The anterograde transport is provided (or mediated) by a class of proteins called kinesins, while the retrograde transport is the typical task of dyneins. Kinesins and dyneins act as motors that travel along the microtubules and unload their cargoes to, respectively, the presynaptic terminals or the cell body.

Anterograde transport: from the center to the periphery

Synapses growth and neurotransmitter release are complex processes regulated by proteins localized in the synaptic vesicles (SVs) or in the active zones (AZs) at the presynaptic terminals. Kinesin motors deliver to the SVs and AZs the specific biomolecules directly from the sites of synthesis in the cell body. Two different classes of motors transport two different categories of cargoes: kinesin-3 transports the proteins needed by the SVs, and kinesin-1 delivers membrane proteins to the AZs. 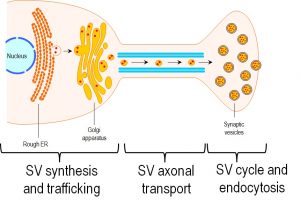 Transport cycle from the nucleus to the synapsis.

One of the most challenging questions regards the comprehension of the mechanisms that determine the specificity of the cargoes delivery. How can the kinesin “trucks” deliver and unload the specific molecules requested by a specific synapsis? Some regulatory mechanisms are partly known: generally, they involve specific phosphorylation of both motors and cargoes from synaptic proteins that act, for example, during the formation of a new presynaptic site. Another hypothesis, based on studies in Drosophila and C. elegans, suggests that the cargo unload seems to happen random, through mechanisms still undefined.

Retrograde transport: what does go back to the cell body?

The transport of molecules from the neuronal periphery to the cell body has three main aims:

The retrograde signals reach the neuronal body in part through a fast-response mechanism mediated by the propagation of Ca++ waves, in part through the activation of slower dynein motors.

Apparently, the dynein carries entire endosomes, which are lipid membranes capable of carrying a range of different signaling molecules. In the cell body, then, the unload of the molecules triggers specific responses at the level of gene expression. However, the transport may also occur through a direct mechanism, without the need of an endosome.

In the case of turnover, the biomolecules to be degraded are carried by a type of endosome called autophagosome. The destiny of the autophagosomes is their fusion with the lysosomes located in the cell body, where the degradation process will occur.

Back and forth, but not in one-way

Even if thinking on a one-direction transport of the molecules is more intuitive, kinesins and dyneins actually bind the same cargoes simultaneously. Both motors regulate themselves mutually, anyway, the mechanisms that determine which motor prevails over the other are not known so far.

Transport impairment and neurodegenerative disorders: the rise of new questions, the need for more answers

A recent study has demonstrated a correlation between the impairment of intracellular transport system and some neurodegenerative disorders, such as Alzheimer’s disease and Amyotrophic Lateral Sclerosis. For that reason, it will be necessary to understand better the mechanisms of the steps of the intraneuronal transport, starting from the loading of the molecules until the regulation of the release of synaptic-specific molecules.