Seizure are frequent symptoms of inborn errors of metabolism. In particular, 26–60% of all mitochondrial disorders occur with epilepsy, and 169 genetic mutations affected mitochondrial function have been associated to seizures.

Dr. Zsurka and Dr. S Kunz from Bonn University, Germany, proposed an accurate review, recently published in the journal Lancet Neurology, of the relationship between mitochondrial dysfunction and epilepsy.

Mitochondria are structures of 0.5-1.0 micrometers in diameter. They are often described as the power plants of a cells, because they produce energy in nearly every cell in the human body. They have different functions such as the generation of adenosine triphosphate (ATP) required for synaptic transmission, the production of neurotransmitters, or the control of neuronal death. Since they evolved from bacteria, they have their own genome, named the mitochondrial DNA, which is always and only passed to the child by the mother. The genome codes for only 13 proteins, all essential for the normal function of mitochondria. 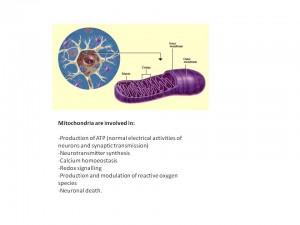 In adult neurons, ATP turnover is so high that 20% of the whole-body metabolism is restricted to the brain. In these cells, mitochondria move very rapidly from one site to another, in order to promptly respond to energy requirement. Several mutations in mitochondrial genes, or in nuclear genes encoding for mitochondrial proteins have been shown to cause epileptic syndromes.

For nuclear genes, it has been observed that the some mutations can cause heterogeneous manifestations in affected patients and not always lead to seizures. This is what happens for Leigh Syndrome, a disorder characterized by a severe and rapid deterioration of cognitive and motor functions. It is usually caused by mutations in the subunits of oxidative phosphorylation complexes, the structures designed to reform ATP, but only 25% of the patients present epilepsy. Other reported causes of Leigh syndrome are defects in NADH:ubiquinone oxidoreductase and in cytochrome c oxidase, two enzymes involved in the mitochondrial electron trasnport chain.

Many other genetic alterations can cause seizures, since they alter different compartments of the mitochondrial machinery, including protein biosynthesis, amino acid metabolism, or protein quality control.

The mechanisms by which defects in mitochondrial function are so closely linked to epilepsy are not clear, although several hypothesis have been drawn. Seizures could be due to changes in calcium levels that might affect neuronal excitability and synaptic transmission, or to oxidation of ion channels and neurotransmitters such as synaptic glutamate. Finally, decrease in the potential of plasma membrane, caused by altered function of ATP-dependent ion pumps, could account for increase neuronal excitability.

Because of the large range of possible causes, there is currently no standard treatment for mitochondrial forms of epilepsy. The most promising approaches are based on gene therapy or on the bypassing of genetic and metabolic defects, by administration of active molecules that can replace or induce the synthesis of the deficient enzymes.

Mitochondrial dysfunction can lead to seizures. In fact, epilepsy may represent a major problem in some mitochondrial disorders. Mechanisms involved are complex but taking into account the great amount of energy required for synaptic transmission it is very likely that processes involved in the excitatory/inhibitory balance would be amongst the most affected. Understanding the pathophysiology of epilepsy in mitochondrial disorders could increase the chance of improving the treatment of these rare neurological disorders.