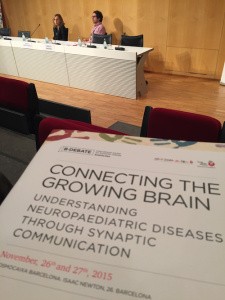 Thanks to the invitation from my good friend Dr. Angels García Cazorla, I had the luck to attend an extraordinary debate on the frontiers of neuroscience, on the last issues being cooked in clinical and basic science in pediatric neurology.

In an increasingly complex medicine and specialty, pediatric neurology, whose essence is change and development, it is essential to connect the continuous advances in genetics, biology and cell and tissue physiology with clinic neurodevelopmental disorders.

When someone aspires to be a doctor (I iatré – ἰατρὲ) -in the Greek and clinical sense of the word- it is unavoidable asking himself questions about the technique (Techne – τέχνη) and be willing to change when they show to be inappropriate and inadequate for the patient.

Observing how a child grows and matures excites us, and  the mystery of neurodevelopment attracts us. Trying to unravel it, requires the study of the biological changes that occur in the a brain that matures.

Brain growth and maturation occur at the synapses. The neuron grows because it extends its arms- axons and dendrites- to other neurons to form circuits, new synapses that will mature and consolidate with use, the higher the child’s experience in the work that these synapses support. This is how the brain volume increases at the expense of increased complexity and synaptic connections between neurons.

It is therefore logical to study the developing brain’s synapses as the core of pediatric neurology.

How synapses grow, change, consolidate and are destroyed during maturation to adulthood, how they transform in visible changes in children: new learning, skills and behaviors. Connecting the molecular to the clinic, this is the ambitious project led by Dr. García Cazorla. Connecting the Growing Brain.

Dr. Garcia Cazorla has been able to convene to debate about the synapses pediatric neurology researchers and clinicians at the highest level. For me it has been a crash course, an update provided by the best. A privilege.

It is very difficult to sum up two intense days of science and camaraderie. Bright people are humble, close and respectful and that was the atmosphere that we enjoyed in the debate between geniuses, raised from the Connecting the Growing Brain meeting, and I’ve been happy spectator. 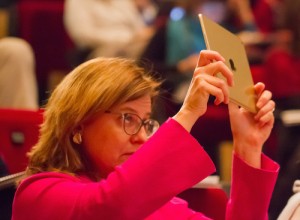 I will try to summarize briefly and in an understandable way the content of the debate.  Fortunately,  Dr. García Cazorla structured it into two distinct parts: the first day the discussions were focused on the synaptic unit, the characteristics of immature synapses and how their alteration causes disease; the second day, on the most advanced techniques for the study of the synapse and also on the most innovative therapeutic techniques.

The course format, focusing on debates proposed by the speakers, permitted the exchange of ideas that connect the clinic with basic science, but always related to pediatric neurology and neurodevelopmental disorders.

The synapse as a determinant of neuropediatric disorders

The first day was divided into three sessions.

In the first, speakers offered an overview of the synapse during neurodevelopment and of the factors and alterations that cause pediatric neurological problems. 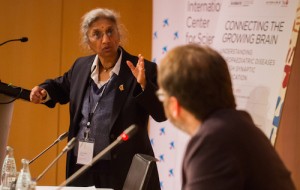 The speakers were Dr. Sakkubai Naidu and Dr. Alex Bayés.

The discussion focused on the changes undergone by the synapse during neurodevelopment. Changes that are determined by both genetics and the experiences that the child lives.

Throughout neurodevelopment, neuron enlarges, branches out and becomes more complex. In turn, also its metabolism, the stimulation of its action potential, the method of production of energy also undergo changes, depending on the physical alterations and the cellular environment, following an increasingly better known pattern.

We can also better know the physico-chemical features that make synapse elements and see how they change as the brain matures. At the presynaptic button and at the postsynaptic membrane, in neurotransmitters or neuroglia, changes occur both in their proteins, structural composition and in their activity. The better we know them, most relevant are the changes. 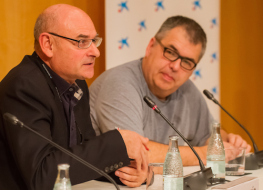 The alterations of synaptic proteins are responsible for the malfunction of the synapse, causing the disease.

Epilepsy, autism spectrum disorders, movement disorders. In all these groups of diseases, research progresses in the identification of proteins and other synaptic elements that are altered and the responsible genetic defect, allowing better understanding of the pathophysiology of tremendously complex diseases and opening new avenues of treatment, some of them already used in clinical practice.

Knowing the genes involved in the pathophysiology of epilepsy permits to gain insight into the functioning of the synapse itself and opens new diagnostic and therapeutic perspectives. And more the synaptic changes causing mental retardation involved are studied in different diseases, more we will understand that they all have a common basis in synaptic alterations.

The vision of the synapse as the hub of child neurological disease will not be complete without going into the specific alterations of neurotransmitters, the molecules that “made” the synapse.

Dopamine and serotonin are neurotransmitters involved in many brain functions so their disturbance causes varied symptoms, especially motor symptoms – GABA – inhibitory- and glutamate -excitatory- neurotransmitters must be balanced for a proper  neurodevelopment. Rett syndrome, autism, Fragile X, schizophrenia and epilepsy are neurodevelopmental disorders in which there is an alteration in this balance. Other molecules act as neuromodulators and growth factors essential for the proper development of synapses, and  anomalies are also causes of disease. 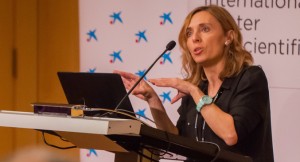 As you see, there are clear reasons for considering the synaptic metabolism as a new way to approach and study neurological disorders in childhood. This is precisely what Dr. Àngels Garcia Cazorla exposed, how the alteration of the synapses has consequences similar to that of other metabolic diseases, with some diseases due to accumulation of toxic metabolites in the brain, and others caused by essential needs or energy deficits.

The session ended with two presentations.

Dr.Gabriella Horvath, talked about diseases caused by deficiencies in the postsynaptic response. That is, conditions in which the synapse occurs, but the cell that receives a synaptic signal cannot do what signal indicates because the cellular machinery is defective. All these problems are still being studied and characterized, given the enormous complexity of the pathophysiology.

Finally, Dr. Thomas Opladen presented a new international database of patients with congenital disorders of neurotransmitters, pterins and folate. Since these diseases are rare, the availability of an international registry facilitates the research, the knowledge and the management of these disorders.

After the first part, I would highlight the following important concepts in neuroscience and pediatric neurology:

This suggests that the mechanisms governing neurodevelopment may be altered by various causes, but with similar results according to the maturation status of the brain. And in turn, the same mechanism of injury can cause symptoms characteristic of various neurological disorders.

The second day was also divided into three sessions, with discussions on techniques for the study of the synapse and the new diagnostic and therapeutic perspectives provided by these studies.

Genes, proteins, lipids and generally molecules and their associations require a very small scale studies. To improve the quantification and thus the identification of these molecules, it is necessary to use techniques of fractionation, such as electrophoresis, and “multiplication” of the number of molecules present in a biological liquid or tissue, to finally be able to identify these molecules using techniques such as mass spectrometry. This whole process can “expand” the scale of these molecules in order to study their structure and function.

But it is not so “simple”, as the proteome of a cell varies according to its status: rest, activation, stress, time of development, effect of hormones, drugs, fever … In every moment and in every cell type, the protein profile will be differently expressed. In this regard, it is easy to appreciate the utility of proteomic techniques in neuropaediatric diseases.

The debate proposed by the speakers of the first session allowed us to delve into the study of the most basic parts of the synapse, the biomarkers,  the genetics, the proteomics and metabolomics of synaptic diseases.

Drs. Benoit Cölsch and Eduard Sabidó explained how proteins and lipids can be identified and quantified in cerebrospinal fluid using mass spectrometry techniques.

Dr. Sakkubai Naidu, and Dr. Judith Armstrong proposed a debate on what it is currently known about the genetic alterations and neurobiology of  Rett syndrome. 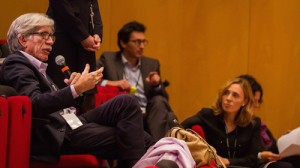 Neurons create circuits in which millions of cells are involved, synapses that are established between them and their maturation is of enormous importance in neurodevelopment. Knowing how neural networks and circuits -the conectoma- are established and modified over brain development is of great importance in conditions such as Attention Deficit Disorder -hyperactivity-ADD-H, where the formation of brain circuits is indeed altered.
Through neuroimaging studies Dr. Paulo Rodrigues, Dr. Antoni Ramos-Quiroga and Dr. Xavier Castellanos explained how the formation of brain circuits can be studied and thus how it is possible to investigate the characteristics of a healthy development, detecting what is pathological.
Advanced imaging techniques allow individualized study of circuits forming a brain, allowing us to get maps, even in creation, of the elements that contribute to each circuit, see how they mature or which alterations are detected in the disease.

In this video from Daniel Margulies, we see a brain at rest, without any particular activity. Warm colors represent areas that are receiving more blood flow and cold colors the less irrigated areas, the colors change continuously over time. To maintain this activity the brain uses 60% of the total energy it needs to function.
In the case of ADD-H, there is a delay in the maturation of several brain structures, which explains the difficulties of these children in sustaining attention, reaction time and the tasks involved in the brain’s executive functions.
The session that closed this course allowed us to discuss study models and new therapeutic perspectives for synaptic diseases.
Thus, Dr. Soledad Alcántara explained that the study of diseases in animal models have obvious advantages but clear limitations. Dr. Hector Diez presented cell cultures as study models. Dr. Mara Dierssen talked about promising drug treatments aimed to improve the brain plasticity in intellectual disabilities (whatever its cause). Dr. Aurora Martinez explained how higher knowledge of the enzymes that contribute to the synthesis of catecholamines, permits the design of drugs aimed to preserve the activity of these enzymes,  promising strategies for diseases in which they are altered. Dr. Cristina Fillat talked about gene therapy in neurological diseases involving the synapse. And Dr. Pau Gorostiza about how light can be used to modify cell biological activity, a new field that opens doors to new knowledge and treatments.
The complexity of the issues and the extraordinary quality of the speakers and presented papers made it worth to attend this B-Debate. For those interested in the topic, I recommend to follow the blog