When Albert Einstein died in 1955, his brain was put in a jar of formaldehyde and sectioned at the University of Pennsylvania by the pathologist Thomas Harvey, who discovered that the brilliant scientist had more astrocytes (or glial cells) than an average male brain. This finding remained underestimated until the 90s, when Stephen J. Smith first and then other groups determined that astrocytes are not just cells in the middle of neurons, but they can be activated in response to neurotransmitters and modulate neuronal function. Today, we know that astrocytes are stellate cells that can directly influence synaptic transmission and are required for the development and maintaining of the central nervous system and for brain activity.

Researchers from the Consejo Superior de Investigaciones Científicas, in Madrid, added a new piece to the story, showing that not all the astrocytes behave in the same way. Indeed, they suggest that each population of astrocytes selectively facilitates the communication between a specific type of neurons, in a highly controlled manner. These results, recently published in the journal Science by Dr. Ricardo Martin and colleagues, were obtained by studying the interaction between astrocytes and two different populations of projection neurons, called medium spiny neurons (MSNs) that populate the dorsal striatum. This part of the brain is important for voluntary movement, but also for skeleton-motor, oculomotor, cognitive and emotional functions. Indeed, damage in this region has been shown to causes motor deficits in Parkinson’s and Huntington’s diseases.

The two main types of MSNs present in the striatum have different dopamine receptors, named D1-type and D2-type with opposing functions, and thus belong to two separate neuronal circuits. The authors demonstrate that subpopulations of astrocytes, activated by endocannabinoid (eCB) coming from the respective neurons, increase their calcium levels and release glutamate, which engage the N-methyl-D-aspartate receptors on neuron surface. Then, activated neurons propagate the signal to the neighboring cells of the same type. 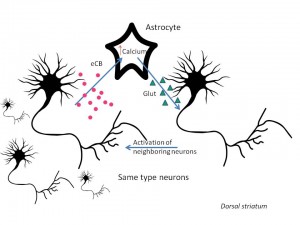 “These results show that astrocytes are functionally differentiated cells that modulate the activity of specific neuronal circuits, which makes them a key element in what we call ‘astro-neural networks, “says Dr. Martin.

Astrocytes guarantee the communication among neurons of the same type. The authors describe a new scenario where circuits are not determined only by neurons and synapses, but where astrocytes are able to selectively spread the signal.

The understanding of these mechanisms in neurological disorders such as Párkinson’s or Huntington’s disease but also in different neuropaediatric diseases might promote the development of therapies targeting astrocyte activation.