Home » Prognosis of patients with nonketotic hyperglycinemia, is it feasible?

Nonketotic hyperglycinemia (NKH) is a rare genetic disorder caused by a defect in the machinery for the breakdown of the amino acid glycine . Above all, it is a very complex disease, since it does not affect all the patients the same way. Because of the huge differences observed in the outcome, researchers from United States, Canada and Belgium joined in order to propose a reliable measure to predict prognosis in NKH.

Nonketotic hyperglycinemia and its several manifestations

NKH, also called  glycine encephalopathy, is an inborn error of metabolism characterized by the accumulation of large amounts of glycine in blood, urine and cerebrospinal fluid (CSF). It affects 1 child in every 60,000 born and differs in regards to disease severity and age of onset. Since glycine functions as an inhibitory neurotrasmitter in brain and spinal cord, the accumulation of the amino acid, particularly in the brain, leads to several and serious neurological problems.

Onset usually occurs during the neonatal period or infancy. The most frequent form affects children immediately after birth, causing lethargy, coma, seizures, and feeding difficulties. Children who manage to survive this first phase develop intense intellectual disability, spasticity and seizures that are difficult to treat. NKH can also occur later, at around six months of life, with development delay and seizures. Finally, although less common, some forms of NKH have been diagnosed in adult patients.

Regardless of the time of disease onset, a proportion of affected patients present an attenuate phenotype, that means that they show less severe symptoms. Hence the difficulty for physicians to determine, after the diagnosis, how serious will be the course of the disease. 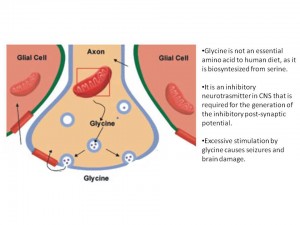 At present there is no a cure, but just treatment options that in certain cases can improve the symptoms. The main used drug is sodium benzoate, which is able to sequester the excess of glycine in blood and promotes its elimination through the urine. Unfortunately, glycine levels in brain cannot be sufficiently reduced. Moreover, because of its side effects, the administration of sodium benzoate needs to be tightly monitored.

Dextromethorphan or ketamines are other drugs commonly used, thanks to their capacity to block the N-methyl-D-aspartate (NMDA) receptor on nervous tissue cells, which result overstimulated in the presence of excessive amounts of glycine. Even though they demonstrated to be useful for seizure control, their effect on the final outcome is still not clear.

Can NKH outcome be predicted?

When families collide with cruel diseases such as NKH, for which a clear prognosis cannot be provided, they often reflect whether to follow with the treatment or not. This dilemma brought Dr. Swanson and colleagues to try to determine factors that could help to predict what will be the severity of the disorder. Their results were published last July on the journal Annals of Neurology. They analyzed several elements from a clinical, biochemical and genetic point of view. Their conclusion, upon analyzing 124 patients belonging to 4 different categories (severe, intermediate attenuated, mild attenuated and attenuated NKH) was that the genotype is the primary determinant of the outcome, although two patients harboring the same mutation, could still have very dissimilar phenotype. Indeed, the researchers observed that the presence of two mutations that completely eliminate the enzyme that cleaves glycine results in severe NKH. By contrast, the presence of at least one mutation that leaves some residual enzyme activity is associated to a more attenuate phenotype.

In addition, the authors also found that high levels of  glycine in CSF usually predict severe NKH, whereas low CSF/plasma glycine ratios are more associated to attenuated NKH. These two factors, together with the age at onset of the disease and the presence of brain malformations, can lead to the identification of 78% patients with severe NKH and 49% of patients with attenuated NKH.

CFS gycine, CFS/plasma glycine ratio, age at onset  and brain malformations can be used together to give a better prognosis of the disorder. The relationship genotype/phenotype should be further investigated, since molecular and genetic analysis also provide important predictors.

Clinicians should take into account such parameters in order to better direct the therapies and advise families about the possibility to continue or stop the treatment. Finally, new strategies aimed to increase the residual activity of glycine-processing enzymes might be beneficial for a better outcome.