Efficient communication between neurons is crucial to the normal functioning of the brain and the cellular basis of thinking and movement control. The synapse is the specialized anatomical site where signals running along axons are transmitted to the postsynaptic cells. This is the main functional unit that enables chemical and electrical communication between brain cells to understand micro and macro-connectivity in the central nervous system. Three main functional spaces can be delineated in the synapse: the presynaptic terminal, the synaptic cleft and the postsynaptic terminal. 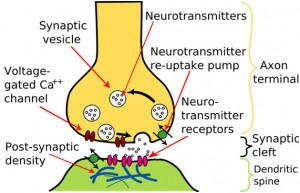 The pre-synaptic terminal receives the electric impulse of the action potential that travels across the axon coming from the neuronal body. When the action potential reaches the axon terminal it stimulates the release of neurotransmitter molecules stored at sacs called vesicles. They have particular characteristics regarding lipid and protein membrane composition and can be considered cell organelles. They need specific transporters to be moved towards the presynaptic membrane. Once at the presynaptic membrane they release neurotransmitter molecules into the synaptic cleft. Then vesicles experience exocytosis and are reabsorbed and incorporated into the vesicle cycle. Calcium (Ca 2+) has a critical role in exocytosis. 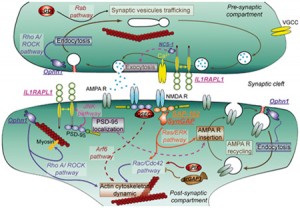