Home » The synapse during development

The synapse is the basic functional structure in the central nervous system. It is important to conceive it as a very dynamic structure, throughout development and adulthood. The neuron is an individual cell that plays an important role during our brain development, not to forget the astrocytes and microglia. We can consider synaptogenesis as an important active process and never ending phenomenon in which every neuron is searching for functional connections with its surroundings. It establishes multiple and excessive connections with other neurons. Not all of these connections will end up being efficient, so in a following process called synaptic pruning all of the useless ones will be eliminated. The permanent ones, will go through a synaptic maturation process, and be reinforced as the useful ones. 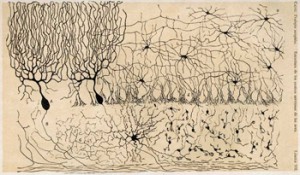 Exactly what controls this pruning and maturation processes, and determines exactly which individual neuron and neuronal connection need to be maintained, is not precisely or exactly known. It is accepted that every neuron not only needs a post-synaptic effective function, but also a retrograde message (positive feedback) from the post-synaptic cell that will reinforce their useful functionality.

Another important process needs to be considered, when speaking about synaptogenesis: the excitatory / inhibitory state. The fetal and neonatal brain, and also during the first year of life, there is a tendency towards an excitatory state. This correlates very well with a higher incidence of epilepsy and seizures in the pediatric population and also in whole life. So this disequilibrium could be considered deleterious to the brain, but the truth is that this characteristic has been maintained ontogenically across millions of years, corroborating it as an important process for maturation.

But as said before, even mature synapses are not permanent, as processes are dynamic and continuous. This is known as plasticity and includes all the processes that tend to shift directions towards a more efficient connection, depending on individual needs. Although the adult brain also exhibits certain degrees of plasticity, its maximum expression is during childhood. New synapses will be created, new spikes from axons will explore new connections, in a never-ending process in our always changing brain. So the idea of a static brain and indivisible neurons and glial cells has been long left behind. Synaptogenesis could be considered a matter of time and space, with its maximal embodiment in the first months and years of life; thus children need to be cared for, motivated, protected, stimulated, compensated and incited to use their creativity and imagination as their brains will be a treasure forever.

Aiming for a dynamic improvement in the synapse during development, a specific section has been created. Please, visit “Pin your knowledge” where you can leave your interesting comments about new synaptic molecules, or new discoveries in synaptic development.